We took a trip to Segou this past weekend and by far the highlight of the trip was a visit to Ndomo. Their website has a stunning collection of photographs of the architecture and the bogolan fabrics made there. Ndomo is a school with a fairly intense program that passes on the tradition of natural cloth dyeing. There are five classes and artist must pass through, each for 2 years. The 10 year program appears targeted at developing a knowledgeable and socially responsible citizen, not just an artist.

The first two years are about learning independence and responsibility, an exploration in how to study and be on one's own. The next two are learning traditional things about how animals live and the natural world, followed by two years about how societies are organized (and the interdependence of humans and the natural world.) Finally, there is the study of the plants and dyes and the symbols- the secret society of bogolan creators. It sounds like an amazing process.

We stopped by, without appointment, and were led to a small stage area in the back. We passed a large group of visitors sitting in a circle listening intently to their guide. The workshop we received was informative and efficient. Our guide gave us a story of how bogolan began, presented the plants and barks they use for natural dyeing, and introduced a few of the symbols used in making the designs.

We each received a little patch of cloth, already dyed in yellow plant fibers, and a small cup of clay. We were instructed to choose four symbols to put on our cloth and then we would have to try and tell a story (create a proverb) about them. (To a group of teachers, this translates as "test!" Luckily, I'd already been taking notes for the blog.)

He washed our little squares, interpreted our stories and set them in the sun to dry.  The final piece of the tour included looking at the vats where dyes are stored and heated, and the boutique, housed in traditional Malian architecture filled with handicrafts and stunning designs.

The story begins with a hunter following a deer. [The road to Segou was filled with deer scampering across the roadway, reminding me of NY highways- always look out for the last one, the littlest one who hesitated and will come jetting out at the last moment.] This hunter, who'd been wearing traditionally dyed cloth, managed to kill the deer and brought it proudly home to his family. Along the way, however, his clothes became stained from carrying the deer, who'd fallen in the mud after being shot.

The hunter's wife, who was happy about having a whole deer to feed and clothe the family, was not so happy about the stains in her husband's hunting apparel. She tried every manner of cleaning off the residue from his excursion to no avail.

Being a woman, however, she took the initiative to turn the situation to her advantage. She developed a code for telling the story of her family, giving advice and expounding wisdom.

In the center of our circle, the guide had laid out a few bowls filled with flowers and barks. He introduced those to us after his story. He presented a small bowl of yellow flowers, the galama. He also brought several cloths of various shades of yellow, achieved by running it through the process of washing and soaking in galama waters. One wash, a light yellow, two washes, a deeper yellow and three washes, a nice mustard color.

The second bowl had bark from the wild grape vines. This was used for making brown. The bark is mixed with water and heated. A similar effect for creating various tones of brown is used- multiple washes result in deeper colors.

The plants are not just used for color however. They also have a medicinal purpose and our guide was ready to share that information as well. The galama plant is also used in treating malaria, as an antiseptic, to regulate blood pressure and for good mental health. Bark from the wild grape vines is an antibiotic and good for cough (he even supplied a prescription: heat with lemon and drink the tea for one week.)

I took a lot of notes on the meanings of the symbols. Most of them had to do with having good character. The women developed these symbols as a form of moral education. They are about accepting responsibility for making good choices. They encourage sacrifice, social service and taking care of one's family.

Some signs continue to carry great weight, such as the X which represents a crossroads. Even in Bamako, we might see little signs of sacrifice that people have made or left behind - in order to pray for those who are sick or to help with guidance on the path to the four main points- be analytical, be social, live in service to others and stay connected to the spirits. Making this kind of sacrifice at the crossroads allows others to see it, and perhaps offer their own prayers for you, or the sick person.

An interesting sign, which may have been an influence in this bank's logo,  talks about being honest and not having debt.

There are also signs about choosing the right path ( straight lines and lines with dots or double lines, each have a significance in the the pathways that we choose to travel down) and helping with emotional and spiritual journeys (the camel's paw is related to this.)

Other animal related signs include the sacred crocodile, which is apparently common across parts of West Africa (Mali, Burkina Faso and Ghana.) The Malian version says that if you bring it food, the crocodile may accept it or he may just circle it and then go back to whatever he was doing before. If he accepts it, that means there is a solution to your problem. If he just circles it and leaves, then... well, the outlook is not so good for your problem. The sign of the crocodile is also about friendship and being neighborly.

After our introduction to the symbols, we were tasked with creating our own mini bogolan. It was a superb workshop. Although our visit may have been spontaneous, clearly the work of the center is anything but.

The final stop in our tour was the boutique, were I exercised incredible will power and self-restraint, and have been regretting it ever since. Not only was the cloth beautiful, but I regret even more not supporting the work of these artists, healers and keepers of tradition.

It merits a ride back. For the blue one. And to show my support of this incredible work. 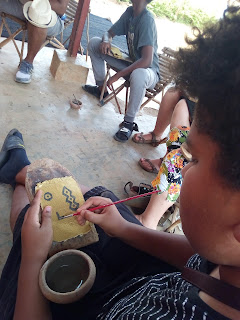 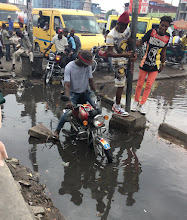 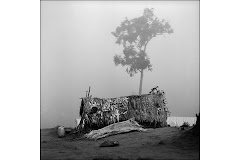 A temporary haven in North Kivu, photo from BBC

Yarhamu-ka-llah; May Allah have mercy 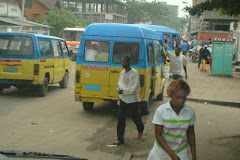